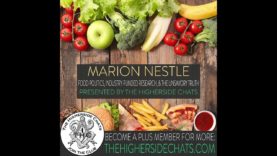 Marion Nestle is one of the nation’s best experts and a prolific writer when it comes to subjects like food politics, nutrition science, the pitfalls of industry-funded research, and deceptive marketing in the food space. She is Paulette Goddard Professor, of Nutrition, Food Studies, and Public Health, Emerita, at New York University, which she chaired from 1988-2003 and from which she officially retired in September 2017. She is also Visiting Professor of Nutritional Sciences at Cornell. She earned a Ph.D. in molecular biology and an M.P.H. in public health nutrition from the University of California, Berkeley, and has been awarded honorary degrees from Transylvania University in Kentucky (2012) and from the City University of New York’s Macaulay Honors College (2016).

She is the author of six prize-winning books:

Food Politics: How the Food Industry Influences Nutrition and Health (2002, with updated editions in 2007 & 2013)
Safe Food: The Politics of Food Safety (2003, with an updated edition in 2010)
What to Eat (2006)
Why Calories Count: From Science to Politics, co-authored with Dr. Malden Nesheim (2012)
Eat, Drink Vote: An Illustrated Guide to Food Politics (2013)
Soda Politics: Taking on Big Soda (and Winning) (2015)
She also has written two books about pet food:

Pet Food Politics: The Chihuahua in the Coal Mine (2008)
Feed Your Pet Right, also with Dr. Nesheim (2010)
Her most recent book is Unsavory Truth: How Food Companies Skew the Science of What We Eat (Basic Books, 2018).